Situated on the East Cape a short drive from the colonial city of San Jose del Cabo, the resort community of Puerto Los Cabos has functioned as a hybrid venue for more than 10 years, with a pair of nine-hole courses designed by Jack Nicklaus and Greg Norman. 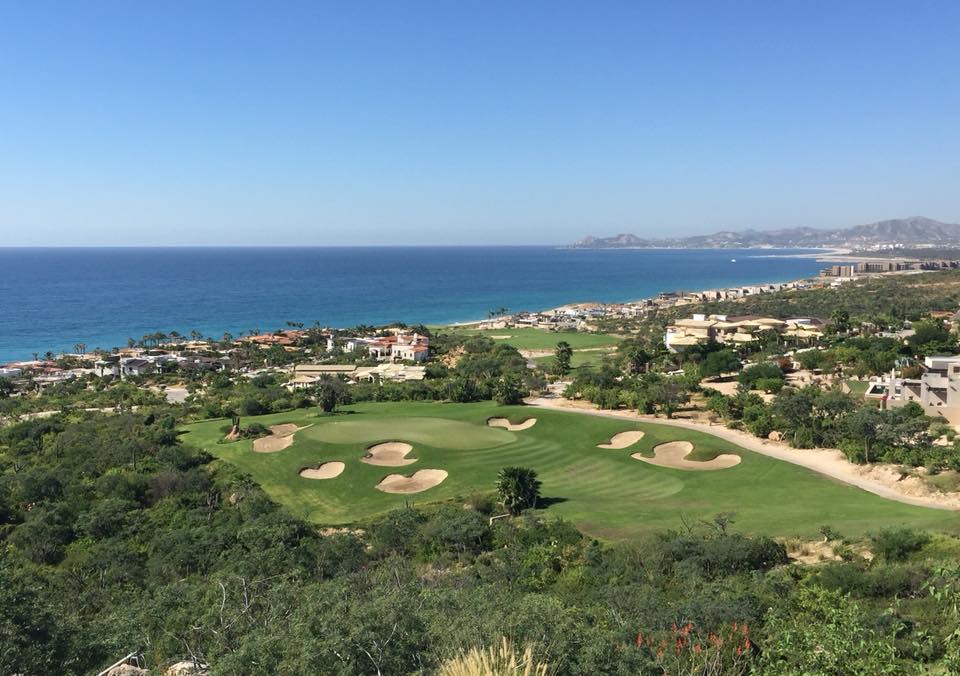 “We did our best to match up the new holes with the pre-existing holes,” said Jim Lipe, a veteran design consultant for Jack Nicklaus who worked on the original layout. “We softened things a little, but the green sizes and bunker shapes on the new holes are about the same as before. Unless you knew so beforehand, you wouldn’t be able to tell that the two nines were built at different times.”

According to director of golf Sergio Castillo, “He (Nicklaus) created some great risk-reward par- 4’s on the new nine where you can plainly see his design philosophy shine through.” He added that the reversal in direction of the old 10th hole, previously an arduous uphill climb since converted to the downhill par-5 ninth, has significantly improved the course. Given a second bite at the apple, “Jack took one of the least popular holes on the course and made it into one of the best,” Castillo said.

The opening stretch, routed at sea level and swept by gentle breezes, is designed to get players off to a good start. The first hole, a links-style par 5 flanked by an arroyo and framed in the distance by dunes, plays directly to the Sea of Cortes. The par-4 second hole, 332 yards at full stretch, invites big hitters to carry a large central bunker to reach the slightly elevated green, with trouble in store for misplayed shots.

The new nine’s picturesque closing stretch—holes 6 through 9—ascends to higher ground and has been the talk of the club since they opened. Each presents a fair but formidable challenge. The par-4 sixth, while not long on the card, demands an exacting approach to a well-protected tabletop green. From an elevated tee, the dramatic par-4 seventh plays to a ramped-up fairway, the uphill target a wishbone-shaped green indented by a deep bunker. At 191 yards from the tips, the sturdy par-3 eighth hole, its green benched into a hillside and ringed by bunkers, plays much longer than the listed yardage due to the prevailing wind. The new par-5 ninth, which occupies the corridor of the former 10th hole but plays in the opposite direction, offers a wide fairway that tumbles downhill to a green defended on the right by a pond. Nicklaus also built a new 10th hole, this one a testing 541-yard par 5 that skirts a winding arroyo on the right and rises to a well-protected green.

On the original nine, the Nicklaus design team recast the former par-5 14th as the new par-4 fifth hole by sliding the tee boxes to the left to straighten and shorten the hole. A breezy, links style creation with a dazzling view of the sea behind the dune-framed green, the fifth, which calls for a forced carry over an arroyo on the approach shot, measures 451 yards from the back tees. It’s the number-one handicap hole on the Nicklaus I & II course, which stretches to 7,194 yards (par 72).

The new clubhouse at Puerto Los Cabos, opened last October, is a distinctive blend of traditional Spanish Mission revival architecture and contemporary styling. It offers an excellent snack bar open for breakfast and lunch as well as shaded outdoor seating. Ingredients for dishes are sourced from Mira flores, a local organic farm. Complimentary refreshments, including fresh fish tacos, are served to players at the Bear’s Den, an on-course palapa.

In tandem with the roll-out of the new nine, Puerto Los Cabos recently debuted a new chipping green and doubled the size of its practice putting green for resort and daily-fee golfers. In addition, the club’s new fleet of platinum-colored golf carts features a pair of USB ports and Visage GPS monitors.